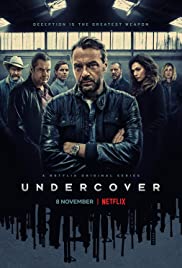 Inspired by real events, undercover agents infiltrate a drug kingpin's operation by posing as a couple at the campground where he spends his weekends.