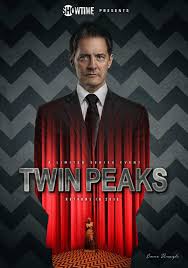 25 years after the cult classic aired, it finally gets a third season with David Lynch at his most Lynchian.