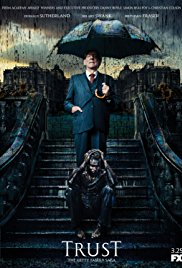 John Paul Getty III, the heir and younger member of an oil tycoons' saga, is kidnapped by the Italian mafia in order to get a ransom, but his family seems not interested at all in having him back.

From Dallas and Dynasty to Empire and Dirty Sexy Money, these prime-time soap operas unveil the dirty secrets and inner struggles of successful families.