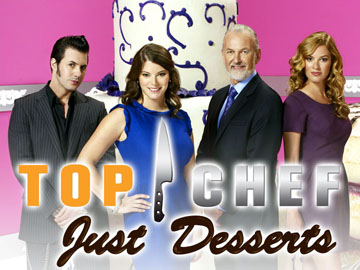 Top Chef: Just Desserts is an American reality competition show, spun off from Top Chef. It premiered on the cable television network Bravo on September 15, 2010. Top Chef: Just Desserts features pastry chefs competing in a series of culinary challenges, focusing on pastries and desserts. The show is produced by Magical Elves Productions, the same company that created Top Chef and Project Runway, and distributed by Bravo and Tiger Aspect USA. It is hosted by Gail Simmons, with head judge Johnny Iuzzini, head pastry chef at Jean-Georges.Other judges include Hubert Keller, owner of restaurant Fleur de Lys and a Top Chef Masters finalist, and Dannielle Kyrillos, "an entertaining expert and Editor-at-Large of DailyCandy"

While American cuisine borrows heavily from the rest of the world (thank you Hamburg and Frankfurt), the chefs in these cooking competitions deliver a new world perspective on global classics.

If you can't stand the heat, you had better get out of the kitchen, and let your competitors pick up that sweet cash prize instead of you; featuring celeb chefs like Jamie Oliver, Wolfgang Puck, and F***ing Gordon Ramsay.

Finally you will get your just desserts--more than a baker's dozen of the best baking and confectionary shows.