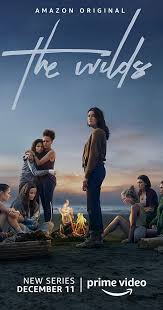 A group of teens must survive after a crash leaves them stranded. There's just one twist to this thrilling drama - these girls did not end up on this island by accident.