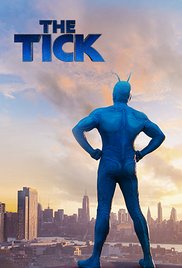 In a world where superheroes have been real for decades, an accountant with zero powers comes to realize his city is owned by a super villain.