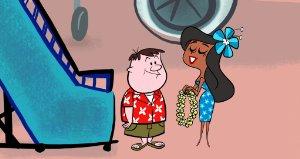 Ricky Gervais and Stephen Merchant talk to Karl Pilkington about important things in life whilst Karl provides anything but intelligent answers. Comedy at its finest with wonderful animation.

Whether they're talking cars or basketball, traveling the world or hanging out in the barber shop--these shows feature groups of guys doing what some guys do best--shoot the shit.