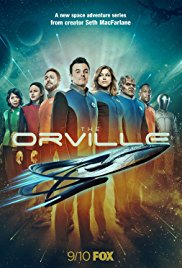 Follows the crew of the not-so-functional exploratory ship in the Earth's interstellar fleet, 400 years in the future.