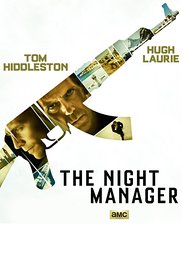 The night manager of a Cairo hotel is recruited to infiltrate an arms dealer's inner circle.