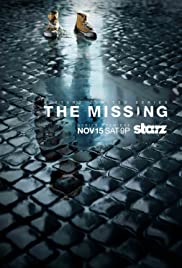 Whereas "The Missing" debuted to critical acclaim by following a father's desperate search for his son, the second season explores a different side of what happens when a child disappears.