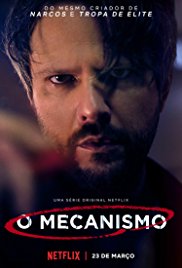 When it comes to TV Brazil is best known for its telenovelas, but also produces terrific documentaries and thrillers.