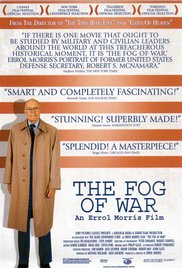 The Fog of War: Eleven Lessons from the Life of Robert S. McNamara (2003)

The Fog of War: Eleven Lessons from the Life of Robert S. McNamara (2003)

The story of America as seen through the eyes of the former Secretary of Defense under President John F. Kennedy and President Lyndon Johnson, Robert McNamara.

Russia and the United States at loggerheads, tensions running high, whispers of government officials selling out their country--sound familiar, it should since that was the Cold War.

"Politics," according to Marx (Groucho not Karl), "is the art of looking for trouble, finding it everywhere, diagnosing it incorrectly and applying the wrong remedies"--and these shows document every step in the process.

A round-up of some of the most acclaimed and popular documentaries spanning from the American Revolution through the Cold War and Civil Rights struggles of the Twentieth Century.

Documentaries featuring folks who can tell a great story, and 90 minutes later you'll be surprised that the documentary is over.

The United States and the Soviet Union narrowly averted nuclear war over two weeks in October 1962 and these documentaries and dramatizations detail how we avoided armageddon.