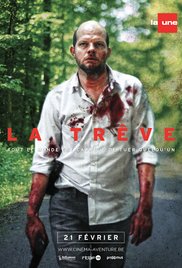 Police detective Yoann Peeters moves from Brussels with his daughter, Camille, to his home town, where the body of a young African football player was pulled from the river.