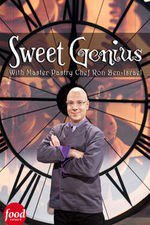 Sweet Genius was an American reality-based cooking television series on the Food Network. The series was hosted by pastry chef Ron Ben-Israel. The premise of the show pitted four chefs, of confectionery and pastry, against one another to compete for a chance to win $10,000 based on the creativity and taste of each dish. The first season premiered on September 22, 2011. Season two debuted on March 15, 2012. Season 3 premiered on October 18, 2012, ending on January 24, 2013.

While American cuisine borrows heavily from the rest of the world (thank you Hamburg and Frankfurt), the chefs in these cooking competitions deliver a new world perspective on global classics.

If you can't stand the heat, you had better get out of the kitchen, and let your competitors pick up that sweet cash prize instead of you; featuring celeb chefs like Jamie Oliver, Wolfgang Puck, and F***ing Gordon Ramsay.

Finally you will get your just desserts--more than a baker's dozen of the best baking and confectionary shows.