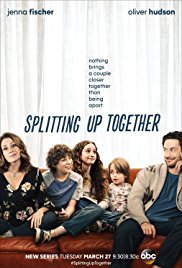 The story of a couple whose marriage is reignited by their divorce.

Shows Like Happily Divorced: Making Marriage Work (Or Not)