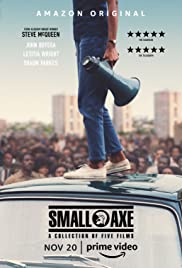 Small Axe is based on the real-life experiences of London's West Indian community and is set between 1969 and 1982.