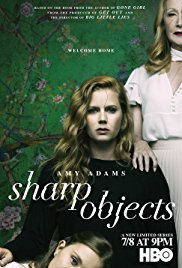 A reporter confronts the psychological demons from her past when she returns to her hometown to cover a violent murder.