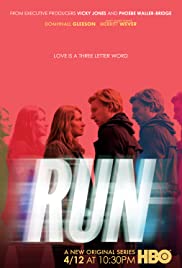 A text message "run" sets in motion a plan when two former lovers activate a plan to escape together and see if they can make it together after a long break.