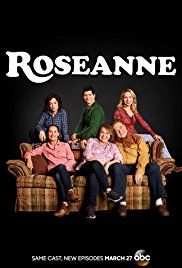 A revival of the popular 1990s sitcom 'Roseanne,' which centered on the everyday life of an American working-class family.