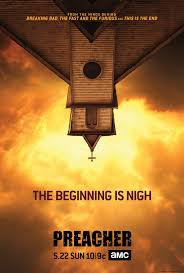 Fulfilling a promise to his deceased father, one-time outlaw Jesse Custer returns home to West Texas to take over his dad's church.