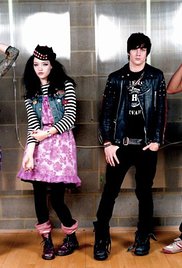 Teen Drama set in the fictional Salanger School for performing arts in London. Four students; Owen, Lila, Kate and Joe try to make something of themselves.