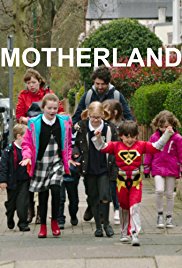 Its about navigating the trials and traumas of middle-class motherhood, looking at the competitive side and unromantic take on parenting - not the cute and acceptable public face of motherhood.

Forget the romanticized takes on parenthood, these irreverent (and often crude) comedies expose the unvarnished realities of raising kids behind the Instagram and Facebook facade.