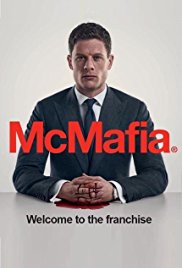 Alex Godman, the English-raised son of Russian mafia exiles, escapes his family's criminal past only to be drawn back in.