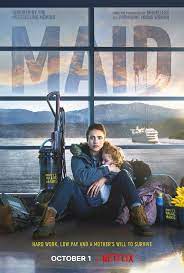 After fleeing an abusive relationship, a young mother finds a job cleaning houses as she fights to provide for her child and build them a better future.