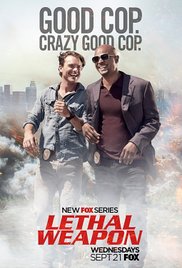 TV show based on the popular 'Lethal Weapon' films in which a slightly unhinged cop is partnered with a veteran detective trying to maintain a low stress level in his life.

TV shows based on high-adrenaline movies like Limitless, Lethal Weapon, and Taken.

In keeping with the overwhelming nostalgia of our era, these shows take classic cop franchises and give them a 21st century remake, from lighthearted 'Rush Hour' to grittier 'Training day'.