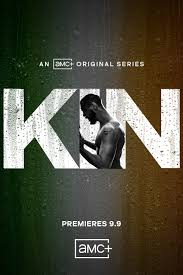 Kin tells the story of a fictional Dublin family embroiled in gangland war and speaks to the enduring unbreakable bonds of blood and family.