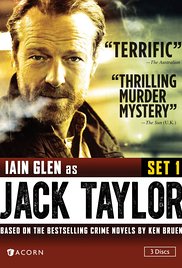 Jack Taylor tracks down a former nun, known by her nickname Lucifer.