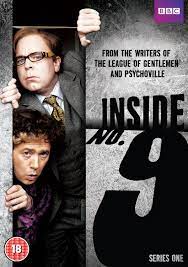 The show invites viewers into some very different No.9s, where the ordinary and mundane rub shoulders with the extraordinary and macabre.