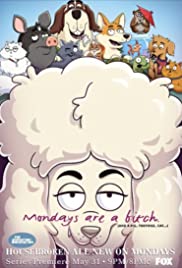 A dog named Honey who runs group therapy sessions to help neighborhood animals manage the neuroses brought on by their owners and each other.