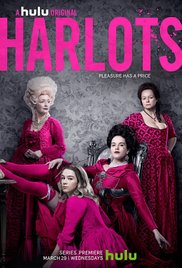 Brothel owner, Margaret Wells, struggles to raise her daughters in London during the 18th century.