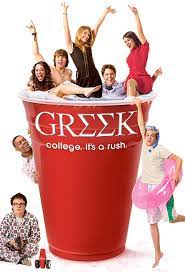 Freshman Rusty Cartwright arrives at college and decides he no longer wants to be the boring geek from high school. He decides to pledge a fraternity.