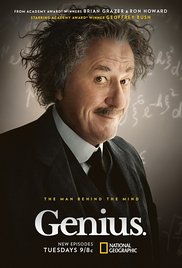 These shows dramatize the lives of real-life geniuses including Albert Einstein and Leonardo Da Vinci.