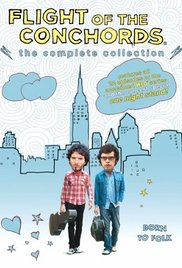 Bret and Jemaine are Flight of the Conchords, a folk-rock band from New Zealand living in New York City in search of stardom.

Despite their relentless one-upmanship, the hosts of these shows are real life friends, who bring banter years in the honing to the small screen.