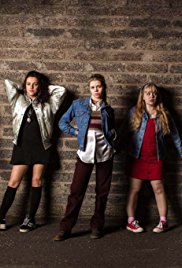 Set in the early 1990s, this sitcom features the personal exploits of a 16 year old girl, her family and friends during the Troubles.