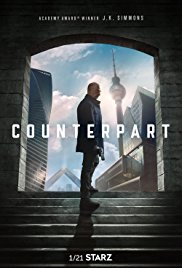 A UN employee discovers the agency he works for is hiding a gateway to a parallel dimension.