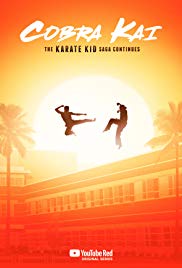 Decades after their 1984 All Valley Karate Tournament bout, a middle-aged Daniel LaRusso and Johnny Lawrence find themselves martial-arts rivals again. Despite an improbable premise, the show is saved by excellent writing and outstanding acting.