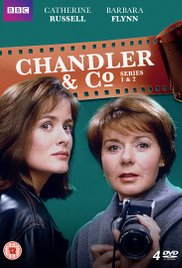 Chandler & Co is a UK television drama series that aired with two seasons from 12 July 1994 to 1 September 1995, about two female private detectives.