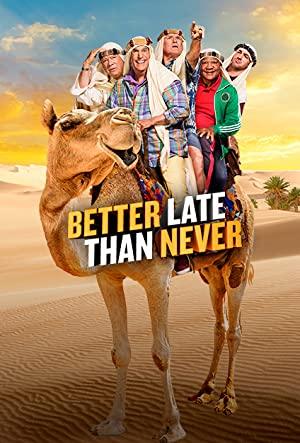 This hilarious fish-out-of-water comedy/reality show follows cultural icons Henry Winkler, William Shatner, Terry Bradshaw and George Foreman on the journey of a lifetime, traveling across Asia on their own with no schedule and no itinerary.

Pack your bags, we're going away. These adventures will take you to all manor of far flung places from Patagonia to our very own land of the free.

Whether they're talking cars or basketball, traveling the world or hanging out in the barber shop--these shows feature groups of guys doing what some guys do best--shoot the shit.

Capitalize on others’ amazing memories and enjoy the jet-set lifestyle from the comfort of your own living room with our list of travel reality and documentary shows.

Shows like Long Way Up: Best of Buddies Abroad

Imagine if someone filmed you and your buddy's last road-trip; then imagine you and your friend were witty enough to justify television exposure; then stop imagining and watch these shows.

If you're bored by sombre presenters and extended museum tours, these comedian-led travel shows may be your best bet for seeing the world.