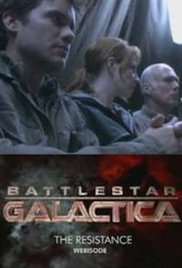 Battlestar Galactica: The Resistance is an online series that aims to fill in the gaps between seasons two and three of the Re-imagined Series.