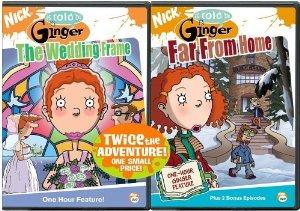 The TV cartoon follows a preteen girl named Ginger Foutley, along with two friends, as they try to fit in social life as well in school and try to avoid any embarrassments.

The best Nickelodeon animation bookended by 2000 and 2010, none of which are actually naughty (in contrast to the stuff Cartoon Network was putting out at the time).

Enjoy this collection of Nickelodeon's best sitcoms, sketch, and animated shows, from the 'Hey Dude' days, all the way up to 'The Loud House'.

Shows Like Hey Arnold!: Get Your 90s Nickelodeon Fix

The very best 1990s Nickelodeon TV shows; don't get us wrong, Drake & Josh are cool, but sometimes you need that real 90s Nick vibe to take you back to the era of go-gurt, yo-yos, and other pre-millennial, hyphenated delights.

These tweenage and teenage girls may be 2 dimensional drawings, but sometimes they'll understood your trials better than your parents ever could; 'As Told by Ginger', 'Daria', and more.