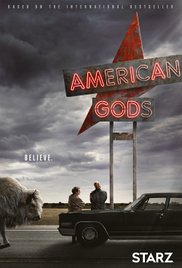 After his release from prison, an ex-con meets a mysterious stranger who appears to be a con man, but turns out to be a Norse god in disguise.

Asgard and Olympus unite to bring you these awesome swords & sandals series, sure to satisfy any Xena fan.

If you couldn't get enough of the Thor movies, these TV series based (sometimes loosely) on Norse Mythology should hit the spot. We throw Vikings in here, since Ragnar claims direct descent from Odin (and who are we to argue?)