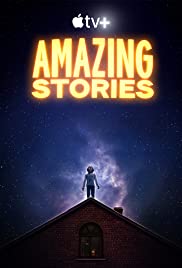 Reimagining the anthology from visionary Steven Spielberg, "Amazing Stories," executive produced by Spielberg, will transport the audience to worlds of wonder through the lens of today's most imaginative filmmakers, directors, and writers.

Apple is entering the streaming video wars, and with $200 billion of cash on the balance sheet, the company has money to burn--let's hope they spend some of it on high quality dramas.