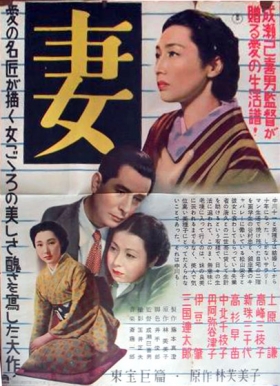 Tokyo. Mihoko and Toichi Nakagawa's ten year marriage is crumbling out of inertia. Each knows the other isn't happy, they themselves aren't happy, but they don't talk about their problems with each other, each festering in their unhappiness largely so that they will not show especially to their three boarders their problems. Mihiko in particular, old fashioned in her outlook, does not see divorce as an option, that move which would be a stigma she could not tolerate. Both are seemingly oblivious to the fact that others around them are facing similar if not worse situations, and that they themselves are largely the cause of their unhappiness. Things for their marriage get worse when Toichi starts to fall for his work colleague, widowed Fusako Sagara, who returns his affections.