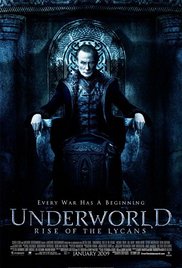 An origins story centered on the centuries-old feud between the race of aristocratic vampires and their onetime slaves, the Lycans.