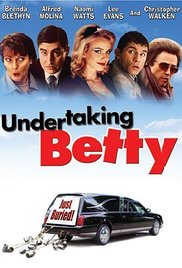 A woman, whose husband is cheating on her, and an undertaker, who has been in love with her since their childhood, decide to fake her death so they can be together.