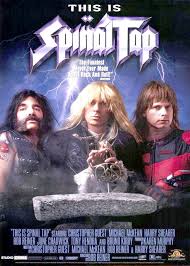 Spinal Tap, one of England's loudest bands, is chronicled by film director Marty DeBergi on what proves to be a fateful tour.