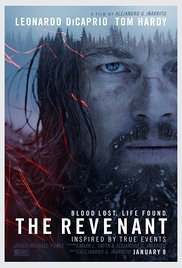 In the 1820s, a frontiersman named Hugh Glass sets out on a path of vengeance against those who left him for dead after a bear mauling.