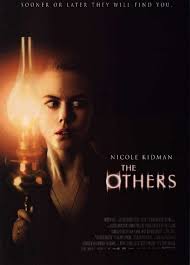 A woman who lives in a darkened old house with her two photosensitive children becomes convinced that her family home is haunted.