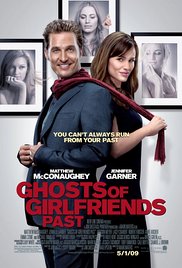 While attending his brother's wedding, a serial womanizer is haunted by the ghosts of his past girlfriends.

Love is strange enough with the regular laws of physics intact, but when magic, time-travel, and ghosts get involved, then all bets are off. Make sure to check out 'Ruby Sparks', for a well-acted romantic fantasy with an indie feel.