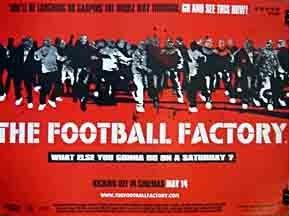 The Football Factory is more than just a study of the English obsession with football violence, its about men looking for armies to join, wars to fight and places to belong. A forgotten ...

Seen 'Green Street' recently, and looking for some more foul mouthed British grit? The footy hooligans in these movies don't just watch football (soccer for the yanks), they live it! Make sure to check out the 2009 remake 'The Firm'!